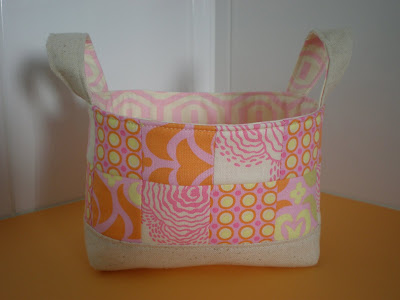 A Spoonful Of Sugar is a great blog run by Lisa and Sarah Cox, a mother and daughter team (40 something and 11 years) who love all things crafty, baking, reading, movies and chocolate.  Lisa says “we just love to sew, craft and bake and decided to start a blog together to share our sewing and crafting adventures! We started our blog in early 2008 when we discovered the world of craft blogs. Sarah loves computer based applications and wanted to start our own blog. She designed the template and away we went! It has been most enjoyable sharing the blog as we love to sew together. It has been an educational enterprise for Sarah – she writes her own posts, takes her own photos and styles her shots – she is 11 years old!”


An avid crafter since childhood, Lisa attributes her passion for sewing, needlecrafts, and quilting to her Mother and Grandmother who taught her the basics and encouraged her to develop her own style. Her first projects involved making clothes for her dolls. Since then she has progressed to dress making, soft furnishing design, patchwork and quilting, soft toy making, cross stitch, and knitting. In fact, there are few crafts that Lisa hasn’t dabbled in at one time or another! She has traveled extensively, has lived in four countries, and has been influenced by the art and design she has seen on her travels. Her designs have been featured in “Pretty Little Presents” (Lark Books, 2009) ; and “Sweet Nothings” (Lark Books, 2009). Lisa is also an accomplished cook and food designer, and some of her recipes for baked goods are featured in “Du Jour” ( Kristen Watts (editor) Jet Media, 2008).

Sarah has enjoyed a range of crafts since childhood, and is particularly interested in scrapbooking, sewing, painting, and beading. She has been taught the basics by her mother and enjoys crafting afternoons with her Mum, Nan, and cousins. She is also an accomplished cook and has won a cooking competition. Sarah is a keen inventor and was runner up in 2006 in the Inventor of the Year Schools Competition (Western Australia) for her invention of Mitt Magic, an oven glove that is sized to fit childrens hands and comes up to the elbow to provide extra protection. Following her win, Sarah set up her own small business, Magic Enterprises, where she sold her oven gloves that she had manufactured overseas. In 2007, Sarah won her division of the same competition with her invention of “Visor Magic”, a storage solution for the car. She made a storage pocket to fit over a sun visor to store sunglasses, mobile phone, and pens. Sarah has appeared in a television program “Our WA: Our Inventors” and has been interviewed on local radio and in print media.

Keep your eye on this duo as I’m sure we’ll see many more wonderful things from them!  Be sure to visit A Spoonful Of Sugar to check out their unique project ideas and of course the yummy baked goods.