Sarah Calhoun grew up on a farm in eastern Canada and has worked outdoors for most of her life.  She used to wear her dads old hand-me-downs as work pants but was constantly having to pull them up or adjust them.  Four years ago she was working on a fire-restoration project in California, and had to keep stopping her work to hitch up her pants.  This experience inspired Calhoun to create her own line of rugged work wear for women called Red Ants Pants.

Calhoun says, “Ever since the gold rush, women have been wearing men’s work clothes when we’ve needed to get serious work done.  We thought it was about time to provide another option.”

What makes Red Ants Pants different?  “The big thing in the design is fit,” Calhoun replied. “Fit, function and flattery.”  And while most folks don’t want ants in their pants, there are more and more women who want the trademark red ant on their pants.

The chocolate brown pants with the embroidered red ant logo are designed to fit all shapes — coming in 70 different sizes.  For those who ride a horse, build trail, wield a shovel, a chainsaw or a hammer — Calhoun designed these pants for you.  Made of 12-ounce-cotton canvas duck with a contoured waist, double-front knees, a reinforced seat and “lots of pockets,” they fit both the worker and any tough work situation.

“One, lone red ant is embroidered in a different place on each pair of pants,” said Calhoun.  To read more about this story visit the Helena Independent Record or Red Ants Pants. 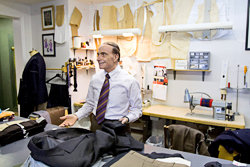 Romualdo Pelle is a Master Tailor with a shop in Madeira, Ohio just outside Cincinnati.  The 73 year old Mr. Pelle has some big name customers from the business and entertainment world, including Neil Armstrong and his wife Carol.  Most of his work, from measuring clients and drawing patterns to cutting and sewing fabric, is done by hand, but he does use a sewing machine for the long seams on a suit’s arms and legs.  He says that his garments match his clients’ measurements to within a quarter of an inch and that he makes clothes to flatter the body since he understands his clients shapes.


The painstaking method of the master tailor, or “bench tailor,” as they are sometimes known, is a dying art in the U.S. There are only about a dozen master tailors left who are members of the Custom Tailors and Designers Association, the industry trade group, down from several hundred in the 1950s. The few hundred master tailors who aren’t members are probably well past retirement age, says Mark Metzger, the association’s president. The group had to cancel its annual “lunch with the masters” two years ago because most of the masters couldn’t make the trip to Las Vegas.  Read more about Master Tailors and Mr. Pelle at the Wall Street Journal.

Why don’t YOU learn how to make patterns using the easy step by step instructions as given in the variety of downloadable pattern making classes at PatternsThatFitYou.com.  By learning how to make clothing patterns according to a person’s individual measurements, and with a little practice in honing your skill, you could be the next Master Tailor the Wall Street Journal would be writing about.

I used to be a big fan of Modern Sewing, Inc., they had this really neat master CD you could get that had hundreds of patterns for men, women and children on it and you could plug in your measurements then print the patterns.  You paid for the number of prints, all the different pattern designs were available for you to choose from and you only paid for the ones you used.  Well I was delighted to find out that Modern Sewing is back, but apparently with a different business model and I like them even more now!

They still have tons of great designs (this is Wrapped Top #5443) for everybody in the family including, pants, tops, dresses, skirts, jackets, raincoats, underwear and maternity styles.  The only difference is that now all the size Small, Medium, Large and XL patterns currently available are FREE!  All you have to do claim them is to click and print.  Now I will say that I had a bit of trouble figuring out how to print mine.  A large format printer or plotter would be nice, but I just have a letter size printer and it kept trying to cram this big pattern onto one piece of paper.  If I had looked around first I would have seen the “How to Print Patterns” link on the right hand side of the page.  There are step by step directions showing you how to print a tiled image – your printer will print a series of numbered images that you then tape together to form the larger pattern.  This was pretty easy to do once I got the hang of it and I didn’t mind the extra ten or fifteen minutes spent taping since I didn’t have to pay big bucks for a pattern, much less wait for it to arrive in the mail or spend my gas money going to the store to get it.

Not all of the patterns appear to be available for download yet, but the good majority of them are and in a wide variety of sizes.  Modern Sewing will also tailor any of the patterns to your measurements for you for a small fee, beginning at $4.95, which I think is more than reasonable.  The company apparently is also supported through the abundance of Google ads on the site, but while some are found in annoying positions (in the middle of a list of patterns), they’re obviously not enough to keep me from getting excited at the thought of my next sewing project while browsing through the available designs at Modern Sewing.

In Mineral de Pozos, Mexico, the remaining women left behind in this mostly abandoned mining town have started their own community business named “Munecas Mina” (dolls from the mine) where they make dolls wearing traditional Mexican outfits in order to earn a living.  The women only make about $150 a month each but they say it is enough to pay for their children’s educations so they don’t have to follow the majority of the fathers and other men of the town who have illegally immigrated to the United States.

Their three year old company was started with a $10,000 government loan which they have since paid off, and they are now trying to obtain a $5,000 loan so that they can develop a business plan to improve the marketing and distribution of the dolls.


“For many of them, the success of the business will help to determine whether their children finish their educations”, says Adriana Cortes Jimenez, who works for a community non-proft foundation and helped the women obtain the original loan.  “If this business doesn’t survive, their children will likely have to go to the States,” she said, “because they don’t have other alternatives.”

The ladies have come a long way since they got started.  Most of them had little or no sewing experience when they used the loan proceeds to buy sewing machines, and they claim that the original dolls were “horrid”.  Now they have a line of more than 20 different dolls in various regional festival dresses, including the Charra or “cowgirl” of Michoacan and China Poblana from Puebla, who’s dressed in the colors of the Mexican flag. The “Adelita,” wearing a straw hat and flowered dress, is named after the female soldiers who fought alongside the men in Mexico’s revolutionary war.